From time to time, evidence of invisible people and invisible jobs appear on the government’s radar screen: when the Census didn’t make sense, when cockle-pickers died in Morecambe Bay. But no concerted effort has been made to find out the true extent of the shadow economy.

In the 1993 film, A Perfect World (Eastwood 1993), Clint Eastwood plays a Texas Ranger pursuing an escaped convict (played by Kevin Costner) in the 1960s. But for me the real star of this film was a shiny, new, gadget-laden Airstream trailer brought into the chase by the FBI. It had wondrous things such as radio phones and faxes and was clearly going to enable the Feds to catch the fugitive. But then all sorts of things go wrong and it finally crashes because it’s not really suitable for ‘real world’ use. 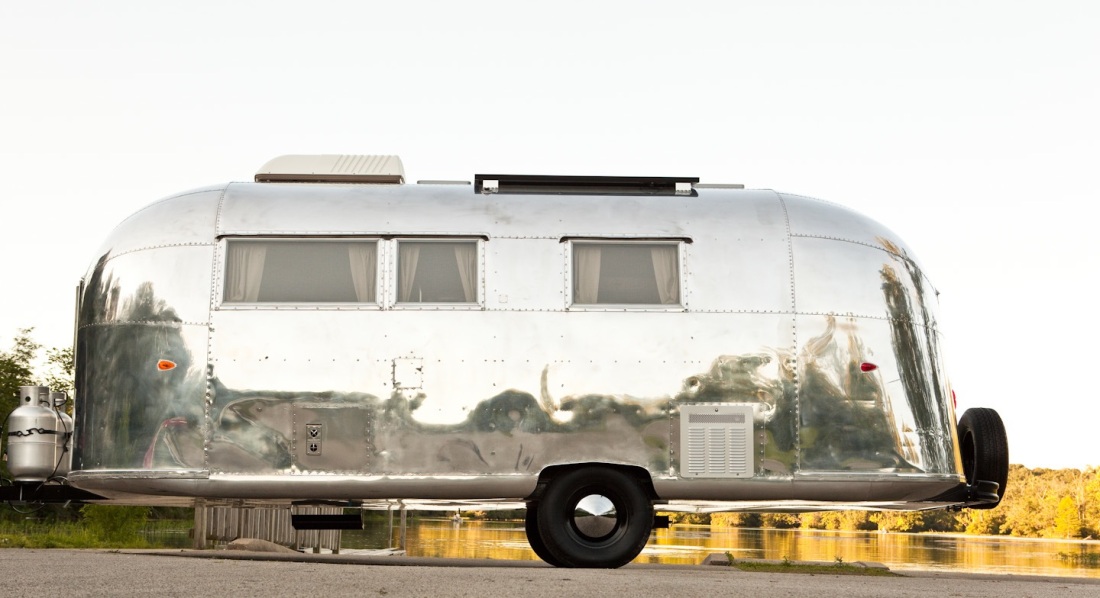 [NB – not an image from the film, just an Airstream]

The film is a fine metaphor for ‘the best laid plans’ going awry when they come into contact with messy reality. Set in the era of Kennedy and the glamour of technology and planning that put men on the moon, it serves as a reminder that things aren’t always how we think they are.

Fast-forward from the early 1960s and we find a parallel in the way various government policies, designed in the spirit of a ‘perfect world’ and the FBI’s trailer, go wrong. The government designs a bright, shiny new tax (the poll tax) to replace imperfect old rates only to find that millions of citizens protest and, more worryingly, simply ‘disappear’ off electoral registers. Billions of pounds remain uncollected and billions more are spent on scrapping the new tax and introducing a replacement.

Then a new policy to make absent fathers’ contribution to their children’s upkeep is embodied in the Child Support Agency. It can easily collect the money because everyone is either paying taxes or collecting benefits, right? Wrong. After nine years of operation the reality is somewhat different. The CSA has collected only £3.2bn – and still has £5.5bn in outstanding debts, of which almost half is ‘possibly’ or ‘probably’ uncollectable or has been written off.

A tiny outbreak of foot and mouth disease is detected and the late (but unlamented) Ministry of Agriculture, Fisheries and Food launches a policy of containment through movement restrictions and slaughter of infected and possibly contaminated herds. The disease spreads far faster and wider than Maff predicts, because movements of animals around the UK far exceed its estimates (by a factor of ten). This is in part attributed to ‘bed and breakfasting’, the practice of shipping herds around to fool Maff inspectors for subsidy payments. The disease itself was almost certainly imported as part of the illegal trade in meat. The cost to the taxpayer is yet more billions of pounds.

More tragically still are the recent deaths of the cockle-pickers in Morecambe Bay and the fruit pickers in the railway crossing disaster. In both cases, illegal migrant workers were involved.

All of these cases have one factor in common – the shadow economy. They have all been partly caused by, or caused an increase in, the shadow sector and in some cases both.

The poll tax encouraged many people – estimates vary but certainly more than a million – to ‘disappear’ from local government registers. It is reasonable to assume that a number would have concluded that if you can avoid one tax, why not avoid more – such as income tax and National Insurance?

The CSA rapidly found that tracing fathers through the tax and benefits system proved much more difficult than was anticipated. It is probably the case that much of the possibly or probably ‘uncollectable’ payments relate to people who have already ‘disappeared’. But there is also evidence that being chased has encouraged others to disappear.

The two agricultural cases – foot and mouth and illegal migrant workers – have more to do with pre-existing shadow economic activity than with creating it. Just two weeks ago the Commons environment, food and rural affairs select committee concluded that the government was still failing to take the problem of illegal-labour ‘gangmasters’ seriously and had failed to commission any research on just how big the problem is. (On a positive note, the MPs did congratulate enforcement agencies on better work on the ground, but recognised they were doing this in an information vacuum.)

By definition, unregistered economic activity is very difficult to measure. But a small but significant academic research effort, some of it sponsored by organisations such as the International Monetary Fund and the International Labour Organisation, has been trying to tackle the problems.

The most prominent international expert in the field is Professor Friedrich Schneider of Austria, who has been exploring the subject for years. In his recent book with Dominik Enste, The shadow economy (Schneider and Enste 2003), he outlines a number of ways in which reasonable estimates for shadow economic activities can be made. The key message from these is that the informal sector is much bigger than is usually supposed – especially in developed countries.

Dr Michael Samers of Nottingham University has also been involved in field research trying to establish just how big the informal, cash-in-hand sector has become. Again, the message is that it is a lot bigger than policy-makers seem willing to recognise.

Both Samers and Schneider spoke last week at a conference called ‘The invisible hand’s shadow’, organised by Nottingham University’s Nottingham Policy Centre. Other speakers covered topics such as taxation, migration, agriculture, child support and the Census. The common theme was that the shadow economy has wide-ranging effects. Some of these are what might be called ‘first order’ effects: the most obvious is a failure to collect taxes, child support payments and so on. There are also ‘second order’ effects, where the size and impact of the shadow economy undermine all sorts of other public sector activities.

One thing that is not at all clear is why this is happening. All over the world, the shadow sector has been historically growing, with fluctuations. In some developing and transitional countries, ‘state failure’ in various forms has been a big factor, but the causes in the developed world seem more difficult to pin down. One of the important messages to come from the conference is that too little research is being conducted.

As the shadow sector grows, national statistics become increasingly unreliable. Just how big the problem is might be gauged from the so-called ‘missing million’ from the 2001 Census (Office for National Statistics 2001). The results showed that the Office for National Statistics’ cumulative estimates since the previous Census – based on carefully designed sample surveys and elaborate statistical models – were out by a million people, most of them (800,000) young working age men. As journalist Graham Bowley pointed out at the conference, the ONS’s explanations for this were ad hoc and amazingly flimsy.

So what is the impact of all this on public services? Let us take local government as an example. Local authority income is closely related to information about population, deprivation, local economic activity and so on. If, as seems likely, shadow economic activity is somewhere in the region of 13% of gross national product in the UK (Schneider) – and this is concentrated more in some areas than in others – then some local authorities’ incomes are going to be substantially unrelated to the real state of their local economy.

Moreover, much local (and regional) planning activity is based on these figures – planning for homes, roads and other infrastructure. Planning is never easy – how much more difficult when local economic data might be 10% or 20% adrift? Local authorities collect taxes and pay out benefits. That there is a level of fraud and evasion in both is well known, but how well known given these levels of shadow economic activity and of ‘disappeared’ people?

Town halls also enforce regulations – about environmental health, transport (taxis), planning, etc. How much more difficult does this job become as the shadow sector grows? The massive growth in professionalised ‘car boot sales’ is a good example of local enforcement by trading standards and environmental health struggling to keep up with sellers of counterfeit goods, illegally imported drinks and cigarettes and home-killed meat.

As the number of shadow workers grows – both domestic and imported – the government is more and more likely to require public services, including local authorities, to check whether applicants for services are entitled to them. This is already causing problems in health, with midwives refusing to co-operate. How long before local government is similarly affected?

Finally, local authorities now contract out large areas of service delivery. How many of the people being paid to provide local services are working ‘cash in hand’ or using fake papers? Casual labour is pretty common in many of the manual jobs that are contracted out, so the answer is probably quite a few.

It would be easy to repeat the above exercise for regional and national government, the health service and many other parts of the public sector.

How can the shadow sector be combated? The papers at last week’s conference started to make some tantalising but inconclusive suggestions. Professor John Hasseldine of Nottingham University Business School has carried out some fascinating work on tax returns. This shows that audit and inspection are the most effective ways of increasing returns – but that persuasion, on citizenship grounds, also produces results (and is a lot cheaper) (Hasseldine 1998).

The reverse can also be true – Dr Carole Johnson, research fellow at the Nottingham Policy Centre, argued that the early policies of the Child Support Agency had probably driven people into the shadow sector, while Dr Lynette Kelly, a research fellow at Warwick University, showed how punitive policies towards failed asylum seekers and illegal migrants were forcing many to disappear into the shadow sector. Drs Mel Evans and Stephen Syrett, both lecturers at Middlesex University, on the other hand, demonstrated that the shadow economy has many positive aspects as well as negative ones, functioning as a kind of safety net in some deprived areas (as has always been the case in developing countries). They stressed, as did others, that some of these positive features need to be harnessed rather than enforced out of existence.

What is most fascinating to me – as a public policy specialist – is just how little this tectonic shift in how citizens relate to the state has impacted on policy makers or policy experts. Yet we tend to cling to the illusions of a ‘perfect world’ in which we confidently believe we know what is going on. The papers at the conference showed fairly conclusively that we might instead be witnessing the rolling back of the state – loss of state control and knowledge – in ways far more profound than anything Margaret Thatcher achieved in the 1980s. Acres of forest were sacrificed to commenting n Thatcherism’s changes while the shadow economy remains largely shadowy. But the effects are all around us, if we are willing to look.

The main point of the conference was that academics and the government need to start looking a lot harder than we have been at the shadow economy and its effects, and the best ways to deal with it. The attendance of representatives from the Cabinet Office, Home Office, Inland Revenue, Customs and Excise and Department for Work and Pensions suggests that at last that may be starting to happen.

[This proved to be way too optimistic – things have changed a bit but HMRC and HMT are still in denial about the size of the problem. CRT August 2015]