I did an interview (online) with a journalist for El Confidencial in Spain. The article appears here.

Here’s the exchange in English for those (like me) who don’t read Spanish). 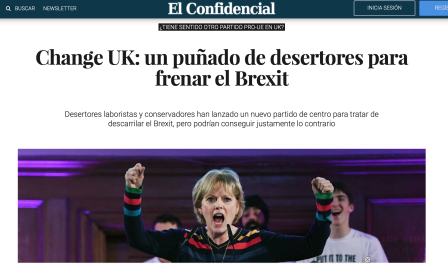 1) What are the chances for a pro UE party in UK at the moment?

With both the main Parties – Labour and Conservative – committed to implementing Brexit, although on slightly different terms, there is a big political space for ‘Remain’. Both the main Parties have also moved away from the centre of politics, which makes the space even bigger.

2)The fact their members came from Conservative Party and Labour Party could be beneficial or detrimental?

Both the main Parties are seen as becoming more extreme and also disintegrating. The idea of moderate members of both being able to come together has a great deal of appeal. But see above – there is a lot of other competition for the centre ground and C-UK may not have achieved enough momentum to successfully occupy it. Unless more MPs defect to them, they may well struggle. Unlike the LDs they have no Party machine, few Local Councillors and no history.

3) The fact Farage (and his carisma) is now the new figure from the main euroesceptic party make them to have less oportunities?

The new Farage Party is sucking in a lot of pro-Brexit support, including a lot of Tories – some MPs, Councillors and activists have said (mostly privately) that they will vote for them in the EU elections, even if they don’t formally defect.

One big problem for them is the Local Elections on 2 May – they have been set up too late to field candidates (this is also true of the C-UK). So the established Parties will be the focus of attention for a while.

In the EU elections, despite the positions of Lab and Cons being pro-Brexit, the Faragists can expect to do well. The Remain Parties (LDs, C-UK, Greens, SNP and PC – and SF in NI) are however divided altho the their combined vote may well be greater they will win much fewer seats.

4) So you think that british people´s is fed up with Brexit and they want to get it finished (even those pro UE) in order to focus on other domestic issues (such as NHS) or there are still apetite to try to revoke the divorce?

Yes, I think people are VERY fed-up with Brexit (even me!) but that can take many forms. Some are just switching off. Some just want to Leave and get it over, on whatever terms. Some want to end it by revoking Article 50. Others want another Referendum to reverse the decision – which is what one million marched for a few weeks ago and 6 million signed a petition for.

The opinion polls have steadily moved towards (a) recognising the economic damage it is doing and (b) wanting to stay in the EU.