The nearest (only?) parallel to the Sir Philip Rutnam affair was the sacking of Derek Lewis as Director General (DG) of the Prison Service in 1995. 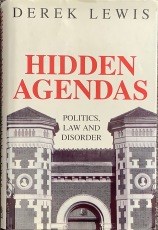 This was another case of a Home Secretary and a senior Home Office civil servant falling out, and the latter ending up without a job.

The Prison Service (of England and Wales) was, back then, part of the Home Office. It has since moved to the Ministry of Justice.

Derek Lewis was brought in, an executive in Granada TV, by Ken Clarke, then Home Secretary. He was tasked with running the Prison Service which had newly been established as an ‘Executive Agency’ within the Home Office.

END_OF_DOCUMENT_TOKEN_TO_BE_REPLACED

The current government has committed itself to “levelling up” – as opposed to policy of “levelling out” – the UK. This means bringing the so-called “left behind” regions, cities and towns up to the levels of the highest, which is mainly London. The government’s focus is clearly on place rather than people. END_OF_DOCUMENT_TOKEN_TO_BE_REPLACED